„Bizarre, funny, touching. […] A cruise as a social utopia. A film that touches the heart.“
ZDF Heute 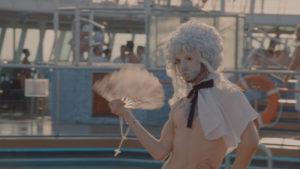 A cruise ship and 3,000 men: a universe that usually remains a mystery to the outside world. Once a year the DREAM BOAT sets sail on a cruise exclusively for gay men where most passengers are united by the wish to live and love authentically as themselves in a protected place. The countdown is on. Seven days of hunting for freedom, love and happiness under the southern sun are about to begin. But once on board, personal stories and hidden pasts find their way to the surface …

With heart und humor, the film follows five men from five countries on the quest for their dreams, far from family, social, and political restrictions. The passengers come from 89 nations. For many of them, it is dangerous to live openly in their home countries. For months, they have been eagerly awaiting this journey. Now, bodies are pumped and suitcases are filled with push-up swimwear and glamorous costumes. Sun, sea, naked skin and a lot of testosterone stoke the vibes. Day and night, time and space melt with the rhythm of party music. But along this dreamy journey, above all, the five men are confronted with themselves and some feel it can also be quite lonely despite being surrounded by 3,000 potential future partners. Thus, the blissful cruise unexpectedly becomes a soul-searching experience—a voyage to the depths of emotion on the wide open seas.

How many hopes will the DREAM BOAT fulfill?

I-D Vice, 28.06.17
„Far from being a simple depiction of the gay community, DREAM BOAT offers the metonymy of a world devoured by capitalism, pushed to the limit of its most intimate consequences.“

Garcon Magazine, July/August 2017
„Dream Boat is to be seen and to be shown. More than a documentary, it’s a document that we will dig out in ten or a hundred years.“

New York Times
„Mr. Milewski does not directly address race and ethnic background, but clearly has some serious issues in mind.“

Movie Pilot, 11.02.2017
„Ultimately, love is love. Anyone who wishes to be reminded of this beautiful fact in all its glory need look no further than Milewski’s stunning documentary.“

Hollywood Reporter
„That the film concentrates on this multi-ethnic group and their emotional and physical issues makes it clear that the filmmaker is not interested in simply exploiting the setting for its cliched camp value. But that doesn’t mean that DREAM BOAT isn’t above celebrating the setting’s hedonistic aspects.“

Village Voice
„DREAM BOAT goes beyond the assless trunks. (….) and offers an alluring, global vision of gay life in the flesh.“

Huffington Post, 12.02.2017
„The true genius of Milewski’s film lies in the way he singlehandedly destroys the differences that we think divide the heterosexual experience from those of the members of the LGBT community. In DREAM BOAT he shows us once and for all that each of us needs, craves and wants the same thing: Someone to love us, for exactly who we are.“

Variety, July 5th 2017
„The film centers on a cruise ship full of gay men, and follows five men from five countries on a quest for connection and freedom. The five men on the ship are natives of Austria, France, India, Palestine, and Poland. International waters provide the opportunity for them to share their hopes and dreams while celebrating their lives without judgment.“

Sueddeutsche Zeitung Feuilleton, 13.07.2017
„You understand, this film will take a look at the small and the big things, at the condoms and the cruise ship. It will show the personalities of individual protagonists and put into scene their collective dream as a mass. (…) Milewski gives longing and sex a whole new aesthetic.“

VICE
„It’s that kind of freedom—and the more troubling elements of gay culture it reveals, too—that’s highlighted by the documentary DREAM BOAT which saw its US theatrical release on Friday.“

Berlinale 2017
„Speaking of life plans: they can be found in abundance in Tristan Milewski’s DREAM BOAT – even if they seem to resemble one another, here under the premise of a temporary manipulation of society on a cruise exclusively for gay men. A society completely devoid of heteros, who normally rule the world, and completely devoid of women too: by purging the majority the minority becomes one. Many of the guests come from countries where simply being the way they are exposes them to serious danger: a concentrated form of existence is the result here, which represents a challenge beyond the purely physical for the participants.“

SPIEGEL ONLINE, Berlinale-Highlights 2017
„The men in Tristan Ferland Milewski’s documentary DREAM BOAT (Panorama) don’t want to leave anything to chance: For one week, they will be on a cruise together with only other gay men. For some people from the global community these days on board of a cruise, with a party program every evening, are an amusing distraction – for others, who come from homophobic countries like India or Palestine, they are the only time they can carelessly enjoy their sexuality. It’s the celebration of an utopia, seven days on the sea.“

Nonfictionfilm, 15.02.2017
„The true test of quality for any documentary film is whether it avoids the obvious. […] what surprises about Dream Boat is the emotional depths it reaches with the film’s handful of central characters. […] director Ferland Milewski succeeds in providing a look behind the scenes of an ostensibly superficial world.“

Travels Of Adam, 12.02.2017
„In the end, Dream Boat shows us more than what a gay cruise might be like, but also what it feels like to be gay today—a conflicting mix of emotions and desires, where we’re all just looking to be loved.“

Teddy Awards 2017
„DREAM BOAT is made by Tristan Ferland Milewski and is an intelligent observation of systematics concerning majority versus minority, of different cultural and political backgrounds, and of course of sun and fun and holidays.“

screenanarchy, 18.02.2017
„Dream Boat is a really uplifting and thought-provoking film that restores your faith in cinema.“

Zickma, France, 03.06.2017
„It’s a very particular and original approach that offers a vision quite far away from usual documentaries. (…) „Dream Boat“ makes you think, fights against all discrimination and puts in light a minority in an incredible way.“

GayViking, France, 18.06.2017
„A documentary full of softness and charme … behind the muscles there are eccentric love stories and the simple desire to be all together with a lot of tenderness. A documentary that will put you back in a good mood.“

Pop and films 26.06.2017
„Between hell and paradise, this hypnotic and sensitive journey stays in mind because of its touching protagonists, sometimes sublimed and transformed like cinema characters, sometimes scanned with their funny sides, their bad sides, their paradoxes. The look is honest, tender, and we remember most of all, above all frustrations and ruthless mechanics the beauty of friendship, the sparkling eyes, while in the impetus of the party all is forgotten.“

Têtu, 27.06.2017
„DREAM BOAT: a brilliant documentary on board of a gay cruise. If we have a thousand clichés about holidays between men in mind, the documentary filmmaker Tristan Ferland Milewski went beyond them.“

Pink TV, 27.06.2017
„But behind this shoal of sexy boys and its sleek images DREAM BOAT spreads mostly a melancholy where solitude, handicap, discrimination and homophobia find their escapism in a bubble boat where all dreams are possible.“

Unification France, 27.06.2017
„An intimate and sublimely humane reflection on that community still marginalized and violated in our so called tolerant society. (…) Thanks to touching and sensitive portraits, an imagery as fanciful as exotic, and a wonderful soundtrack, Dream Boat is a documentary that takes at last a human and intelligent look on the gay community and its problems, and mostly its rights to exist fully in its differences.“

Davie Village Post, Canada, 05.07.2017
„(…) it’s refreshing that this documentary can enrich the characters lives by reflecting on how they feel and how far they have come.“

dpa, 06.07.2017
„The work offers an honest and non-voyeuristic view behind the scenes. It looks beyond the surface and depicts humans on a quest. (…) The documentary succeeds in offering a journey into a universe, that for every single protagonist is also a journey to himself.“

Les Inrocks, 25.07.17
„Dream Boat“, a flamboyant and sulphurous film that transcends the clichés about homosexuality.